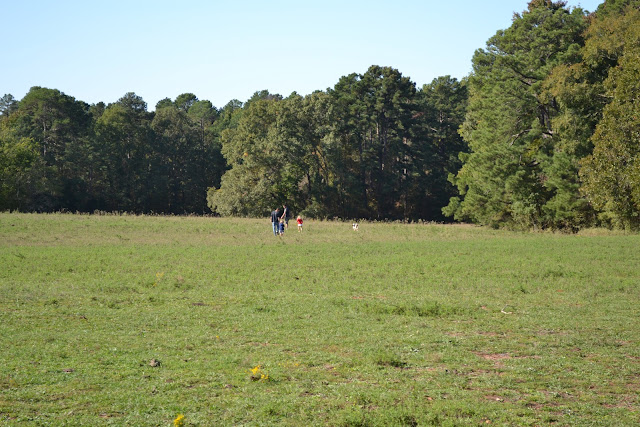 This weekend, my family and I are spending some time with a friend in Henderson, TX. Never heard of it? Of course not! We’re pretty much in the middle of no where and some place else to go. And let me tell you folks, this place is KUNTRY, even to someone like me! Don’t get me wrong, I like the country. I grew up in the country. I’m not incredibly fond of bumping off the hot spot on my Droid to get internet service, but I really do like the peace, quiet, and beauty that are afforded by a VERY rural setting. Earlier today, B, his buddy, and the babies headed out for a walk in the woods with one of the stray, starving dogs that wandered up to the house while I stayed behind to get some work done. 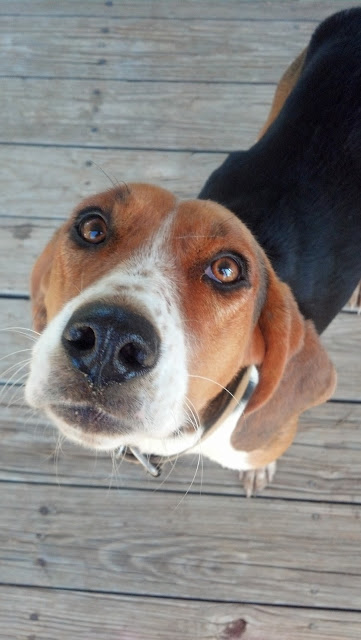 And wouldn’t you know it? Daisy stayed behind with me to “help” me work. Bless her heart, she’s so hungry! And she’s so sweet. I’ve tried to call the owner but the number is a non working one but I’m still Googling and trying to find her home. 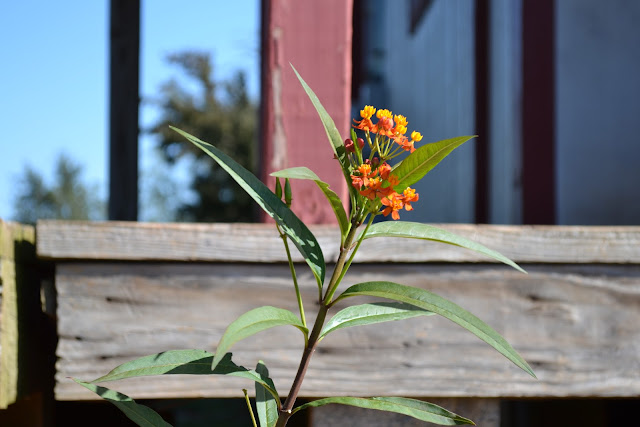 While my family was exploring, I did what any good blogger would do. I grabbed my camera and tried to capture some of the peace and beauty. I honestly think this is a weed, but I don’t care. Pretty no? And this Live Oak is magnificent. We were told it was planted back when they bought this place in 1972! 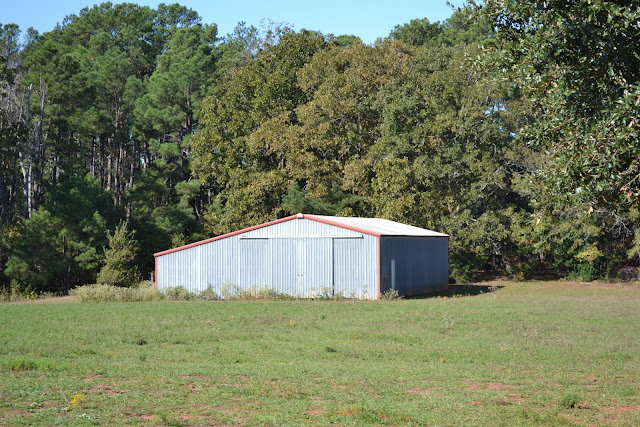 And I really need to make it back to this barn before we leave. I just know there are treasures in there that I want to see. I used to love playing in my barn growing up. 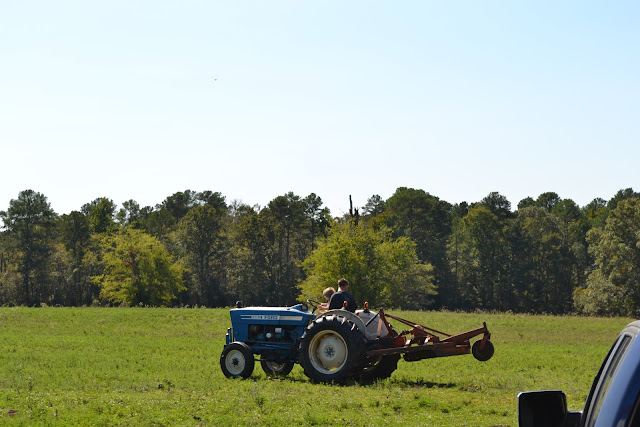 I was back inside plugging away when I heard my family emerging from the woods, they aren’t a quiet bunch. Then I hear a loud engine fire up. What? Then “Bubby, do you want to drive the tractor?”. Wha…what? Mommy panic set in, of course, until I ran outside. It was the sweetest.thing.ever! 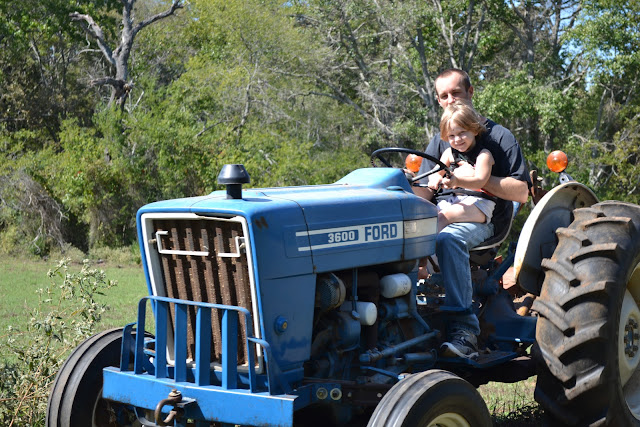 Daddy and Bubby bonding time. I actually have photos of myself (older than Bubby of course) on a similar tractor with my Dad standing behind me on the back of the tractor. Brought back fond memories. 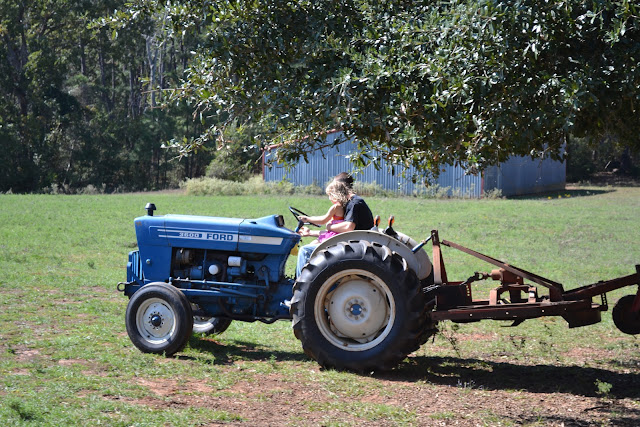 And then it was Bug’s turn. They were just so happy and it makes me smile!
Looks like we’re in store for a bonfire with marshmallow roasting this evening and who knows what in the morning. Even though I’ve been working, it’s enjoyable and I’m digging the view. Hope y’all are having a great weekend too! 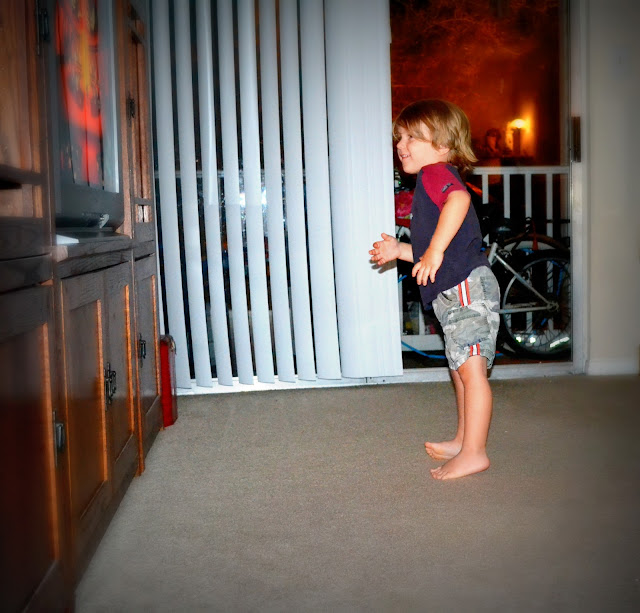 As I shared with you a little over a week ago, Bubby has been having his “can’t walk” spells again and after a trip to a fabulous new doctor and the hospital for full blood work and urinalysis, we still don’t have answers. I have received daily emails, texts, and phone calls from friends and family since I shared our story and I appreciate each and every one of you that has contacted me to show your love and support!
The update isn’t anything miraculous. The blood work and urinalysis all came back clean which in itself is awesome news and we are incredibly relieved. The only problem is, he’s still limping, almost 2 weeks later. It gets better some days, and worsens to almost not walking at all again on others. As his mother, this is unbearable to watch. But, hope of all hope, Dr. McClue (ha, that’s what my friend Jody calls him and I love it) still recognizes that there is a problem and it won’t just go away because these are NOT growing pains.
Our strong family history of kidney issues (my Dad only has one left and my oldest daughter had severe kidney reflux as a young child that took medication, constant specialist visits, and many years to fix), we are still leaning toward that despite the results of the urinalysis. Those tests would not show a blockage or defect. But rather than subject my poor baby to more and more tests right away, Dr. McClue has me keeping a daily journal for a month before returning for more testing. We’re looking for proof and trigger points and it has been eye-opening.
His pee has always stunk seriously bad, he’s never been regular, and he’s been impossible to potty train because he just doesn’t seem to know when he has to “go”.  I’ve always told B about his occasional ginormous urination but I just never put 2 and 2 together.
He’s been limping all week, quite heavily in fact since Monday again. I had been journaling everything. Then on Thursday, it was so painfully obvious. He woke up and couldn’t even walk his sister to school with me. He just couldn’t even stand up that long so we took the stroller. I checked his Pull Up before we left and it was completely dry. At 11:15 am, I changed a soiled Pull Up (I am so over changing poopie diapers after 23 years…UGH) but it was still completely dry despite the fact that he had already had 2 cups of drink. Then at 11:45 am, he came running (yes running) to me and excitedly said, “I peed Mommy, I peed!”. He had in fact peed, so much so that his shorts were drenched and there was a puddle on the floor. After we cleaned up, I immediately noticed a change in him. He was still limping but he was running and playing and laughing, and he told me his leg didn’t hurt anymore!
So yes, signs say kidney. And I’m journaling and watching very closely and we check in weekly with Dr. McClue. Bubby is well this weekend, and he’s happy, which makes me happy. And we’re moving closer to answers. The tests will probably be moved up now because of this second “spell” but some of these tests are painful, especially for little boys, so I’m thankful the doctor is narrowing down before proceeding.
I’ll keep y’all posted and I just can’t express enough how moved I am by all of you that have shown such care, concern, and support. It means a lot. Keep sending sparkles and we’ll recycle them and share. Life is good when you have the love and support of your family and friends. Our life is amazingly good!
Sparkle On,