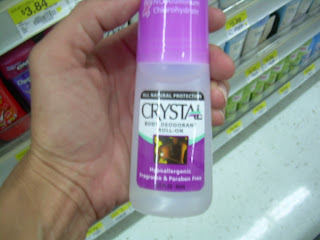 We live a healthy lifestyle!  I pride myself in all things healthy!  But when it comes to natural products, I’ve fallen short to say the least!
Most of the naturals have a “stinky” odor and they are very expensive.  Neither of these things appeals to me.  I hate the “stinky” and I live on a budget.
With that said, I know that naturals are important.  I’ve heard that avoiding chemicals in our life could actually help with behavioral issues (and seriously, we could use that kind of help around here) so I’ve been on the hunt for good naturals!
I really don’t like the cleaners I’ve found.  My hubby actually uses one on all of his coolers and such for fishing but that stuff smells so horrible, I can never be a fan!  So my focus was on naturals I could use on my/our bodies!  I’ve heard some awesome things from a few friends about Crystal Body Deodorant Roll On.  I wanted to give it a shot.  My Dove has served me well over the years, but it contains chemicals and chemicals are NOT a good thing!  Not for the environment, not for our bodies, and NOT for our kids’ future! 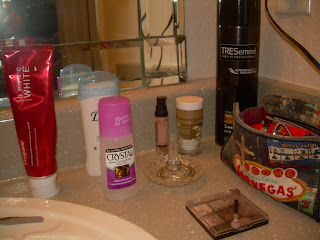 I made the swap as you can see and decided to put it to the true test!  Before sharing my experience though, let me tell you what this deodorant (and remember it is NOT an antiperspirant as there is no such thing as a natural antiperspirant) claims to do for you by sharing some information directly from their website.

“Crystal deodorants – the all-natural deodorant alternative to chemically laden commercial deodorants, are composed of mineral salts, which form a topical layer on the skin. While most deodorants mask odor with scents or fragrances, Crystal deodorants actually prevent body odor from beginning by creating a thin barrier above the skin so that bacteria cannot form. Available in both unscented and lightly scented versions, Crystal deodorants are hypoallergenic, non-sticky, non-staining, dry instantly and leave no white residue. Furthermore, Crystal deodorants contain no artificial coloring, chemicals, dyes or alcohol. They contain NO harmful aluminums, are not tested on animals, and are safe for the environment!”

Sounds fabulous right?  But the true test to me is always to try it out on myself after researching a product.  First test was of course those pesky odors I keep referencing with the other naturals I’ve tried.  The Crystal Roll on claims to be fragrance free.  I have a very sensitive nose and a lot of products “claim” to be fragrance free, but I still smell “something”.  Guess what?  This is actually odorless!  Score!
Second test:  Non-staining huh?  We’ll just see about that!  I’ve tried everything and “little black dress approved” or not, everything stains my clothing!  I usually apply my deodorant after getting dressed to avoid those white splotches on my clothes.  But the instructions tell you to apply to clean, showered skin.  Since I like to follow the rules, I went ahead and applied prior to getting dressed against my better judgement! 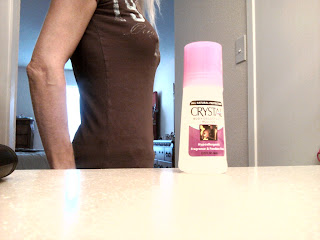 I don’t know about “little black dress approved” since I didn’t wear one of those, but this stuff sure is little brown shirt approved in my book!  No residue at all!  Yet another SCORE!
These things might seem trivial to you.  You’re not me and you probably don’t even want to imagine what goes on inside this  head of mine so we’ll move on to the things that probably really matter to all of you with regards to a deodorant!
So for the final test, the family and I headed to the park.  Yes, its October, but let’s not forget that I live on an island, in Texas.  It’s still in the high 80’s and low 90’s during the day here so as you can imagine, even a day at the park will cause you to sweat (and stink). 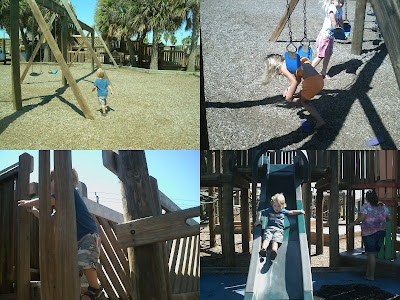 I just can’t express enough how active my babies are no matter where we are!  And it’s this Mommy’s job to keep up with them.  So as they are running, swinging, climbing, and sliding, I’m the one running after them, swinging them in the swings, climbing after them, and running to the end of the slide to cheer them on!  We were there for almost 4 hours and they never stopped, so neither did I!
When we were herding the babies to the car on our way for home in time to cook dinner, I looked at B and he was sweating (although I don’t know why, football was on so he sat in the shade for most of the time and checked football scores on his phone). I checked and he was stinky (of course I checked, this was a test after all and I had tried the Crystal and he had used his standard).  And although I had been sweating (remember this is a deodorant NOT an antiperspirant), I didn’t stink one bit.  I made him smell me to confirm!  Yes, we are a strange couple, it’s OK, we have fun!
We headed home and I decided to put my Dove out of commission and replace it for good with the Crystal Roll On.  I’ve been using it for over a week now and am extremely pleased with the results.  No issues!  No complaints!  And it works wonderfully!  YAY ME!  I’ve finally found a natural that I’m pleased with which proves they are out there.  Since it’s so important, I am going to be seeking and testing more naturals as I work to get the chemicals out of our home!
You can find out more about Crystal Roll On for yourself by liking them on Facebook and/or by following them on Twitter.  I highly recommend that you look more into this product and test it out for yourself!  You can thank me later!
Disclosure:  This shop has been compensated as part of a social shopper insights study for Collective Bias.  All ideas, opinions, and photos are entirely my own.  #CBias 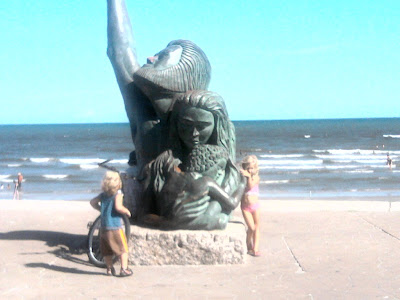 This statue entitled “Place of Remembrance” by Galvestonian artist David Moore was dedicated on September 9, 2000 in memory of the 10,000 plus islanders that lost their lives in the Galveston Storm of 1900.  It sits prominently on our seawall, standing 10-feet tall, as a memorial to those lost at sea as well as to the strength of the survivors that stayed to rebuild this beautiful island that we call home.
My kids are drawn to this statue.  There are many on the island, but this is their favorite.  I don’t know that they “get” it’s meaning, but it’s presence and vibe are so powerful that they insist we stop at it each and every time.
Someday they will understand the devastation that their island and it’s people have endured over the years, more than once unfortunately.  And they will understand the sufferings and the bravery, and they will “get” this statue, and they will feel sadness!  But for now, I’m glad they just enjoy the beauty! 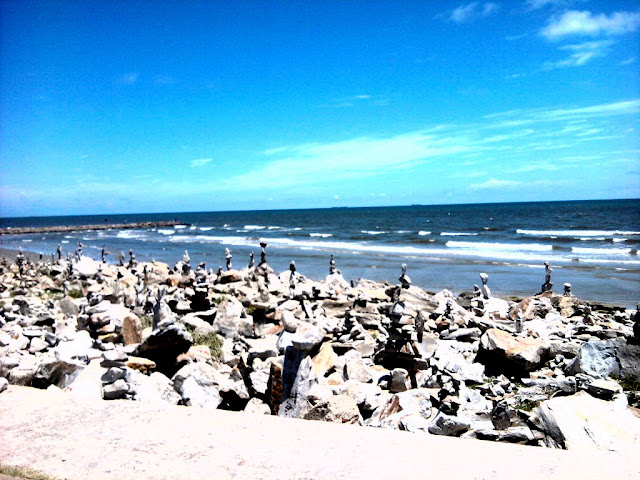 I love my island!  We have shiny happy people here!  They come out at night and adorn our beaches with rock art!  How cool is this?  I love looking at this stuff while riding down my seawall!  Rock on rock art people!  You make us smile!