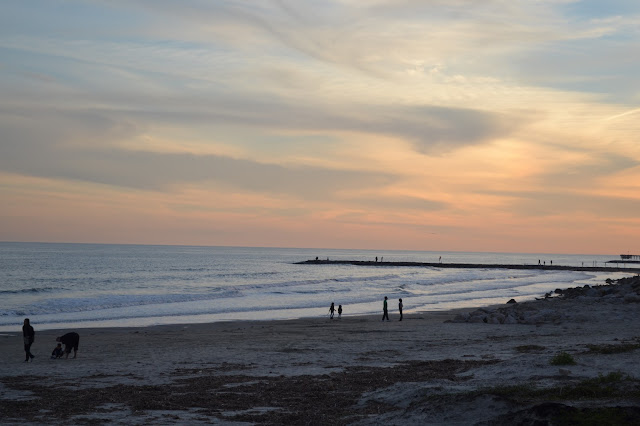 Beautiful no? We’re home! I know the seaweed is a bit distracting but that’s to be expected at this time of year. Look beyond that. Look at the shiny happy people. Revel in the beauty of those jetties. Feel the breeze. Enjoy the gentle waves. And just look at that sky! This is Galveston at dusk. And this is why I’m happy to be home.
Because I love it here oh-so much and because I want you to enjoy the beauty that is Galveston Island, I will be posting a photo a day of our little paradise on Earth. Some will include my babies (as if you had any doubt), some will be dawn, some will be dusk, and some will just be the beauty of the ocean or the wildlife at any point of the day. Rest assured, none will be sunrise…I do NOT do sunrise.
So welcome to Galveston, stay tuned, and enjoy your daily dose of Club Paradise! 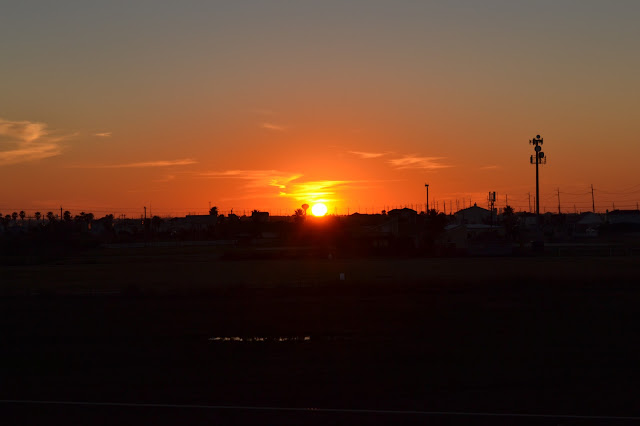 Sunset in paradise. It brings new life to a broken soul. If you look beyond just the sheer beauty of this site, you can see what I see. A new beginning. A window to happiness if you will.
We’re back in my paradise. I can’t reiterate enough that everyone has their own vision of paradise and we don’t all have to agree, but this is mine. This move has been trying, all moves are. I’m trying to maintain a work schedule, B’s ridiculous schedule, trying to get the girls back in school, and trying to regain some sense of normalcy. All of this has come with its challenges.
This week has been trying. We moved in to no hot water. Me without showers is not a pretty site. Not just the visual, the actual feat of making it through a day with me without a hot shower and thorough leg-shaving is a task that no one should have to endure. But we’ve done it!
Yesterday was a comedy in itself as the maintenance men came in and out and it was proven that the 4-year-old has a much higher capacity for communication and people skills than the 12-year-old but we’ll leave that for another day, another tale all in itself. It’s truly funny so you’ll want to tune in for that one!
Today, I woke up early, got some work done, took a hot shower with full leg shaving (no thanks to the 12 year old that took her SHORT 22 minute shower before me) and then I headed out to register the girls for school. Bug and Bubby were of course in tow. I asked the drama queen if she wanted to come but she politely declined, “I wouldn’t care to go, thank you”. Of course she wouldn’t. She had infinite internet at home while I had to struggle and fight to get her registered because her “mother” has never provided us with the proper paperwork. OK, 4 hours of work missed and she still isn’t registered. And…and…and…I missed Bug’s registration time all together because of that nonsense. Next time…I don’t care to go either!
But I digress! Back to the task at hand. Today was basically a bust and I was feeling under-accomplished. The girls aren’t registered, my work looms over my head, and the condo is still a mess. B was at school so I fed the kids and stepped outside to sulk.
But how can one sulk when they see such beauty? They can’t! I ran inside and grabbed my camera to capture the beauty. I snapped shot after shot of the most amazing sunset. And then later tonight, after everything settled down, I looked at my photos and saw the most amazing thing. That orb, no actually amazingly positive aura around that sunset, is the foreshadow of what is yet to come in my life.
It is hope.
There is nothing but positive in my future. I’m putting all of this negative behind me and I’m following the advice of the nature that presented itself to me tonight, here in my paradise. I’m back where I belong and the forces of nature are here to remind me of that. Tonight, the stars aligned again, for the first time in a long time and I felt nothing but love, despite the negative forces from within.
I enjoyed my babies like I haven’t done in WAY too long and I really don’t care that we are a day late (or so) getting Bug registered for school here. She’ll catch up. She’s a silver kind of girl after all. We’ve got this. The sun’s aura told me so! 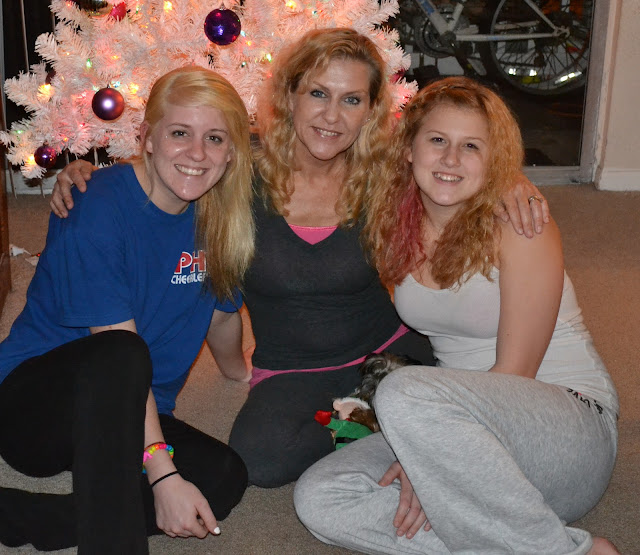 Throughout the week, I’ll be sharing with you some of the highlights (and low lights) of the girls’ visit to Texas. It was chaotic, full of laughter, a little drama, too much money being spent, snake bites (not literally, funny story, stay tuned), but most of all love.
I miss these girls every day. We don’t always get along or see eye-to-eye, but we are family and we’ll always stick together. And our hearts will always be one. My children, with all of their flaws (that they get from their mother), are my world.
So when these babies left today, my heart broke a little more, and my world got a little less beautiful. Seriously, look at them, they are both true beauty incarnate. I already miss them, and their chaos, and I won’t sleep until they get home safely. And my heart won’t be totally happy again until their next visit.
I know that children have to grow up and move on, but I never thought it would happen so soon. In the blink of an eye, it all happens so quickly. I cherish the time we do get to spend together and I’m thankful that they still call me when they’re in doubt about things in their lives or in trouble. They may not always “like” me, but they still trust and love me. I must have done something right along the way.
Meanwhile, the babies are sleeping and I’m playing catch up on work that I’ve let slip while all of my babies were under the same roof. Somehow that just didn’t seem to matter. I’ll be sure to share more in the coming days. I hope you’ll stop back by because you do NOT want to miss the photos that I have to share.
Until then, Happy New Year! I hope 2013 is your best year ever.