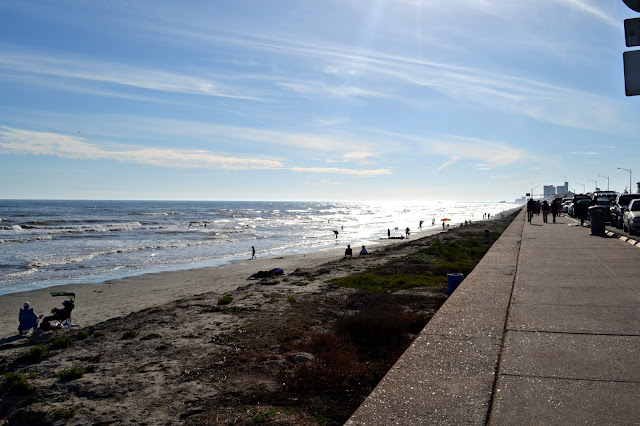 The Seawall…the Seawall…she’s always talking about the Seawall. Just what is this Seawall and why do I care?
“The fact that the city of Galveston exists today is the triumph of imagination, hope and determination over reality. Perched precariously on a sand-barrier island in the Gulf of Mexico, Galveston is subject to the whims of inevitable hurricanes.
One of those hurricanes, dancing its deadly way across the Gulf of Mexico in early September 1900, came very close to dealing the city a fatal blow. An estimated 6,000 residents died, and most structures in the city were destroyed or badly damaged. In terms of human life, it remains the worst natural disaster in United States history.
Galveston’s leaders took several major steps to recover from the storm and to prevent a recurrence of the devastation. First, they developed a new form of municipal government, one with strong centralized control to handle the economic recovery of the city. Next, they built a massive seawall to turn back storm-generated waves. Perhaps the most amazing step they took was to raise the level of the entire city, by more than 16 feet in some areas, in order to keep flooding at a minimum.” (cited: http://www.texasalmanac.com/topics/history/galvestons-response-hurricane-1900)
So did you really read any of that? An estimated 6,000 residents died in the storm of 1900…it remains the worst natural disaster in United States history. And then there was Ike. That Seawall saved many a building, and many a life during that storm, although far too many perished. The island was devastated just the same. But to those of us that inhabit this island, that Seawall is a beautiful thing. We feel safer knowing that flood levels will be minimal thanks to our beloved Seawall and we thank the officials that deemed it necessary way back when.
So why do I talk about the Seawall so much? Because it’s beautiful of course. Because it protects me, my family, and my belongings. And because it represents a history of destruction that we as a community will never allow to invade us again!
Deal with it. You might get sick of hearing me talk about it, but I’ll continue to do so on a daily basis. Over 6,000 people died to make it happen. It deserves our respect, and so do they. And it’s a beautiful thing!