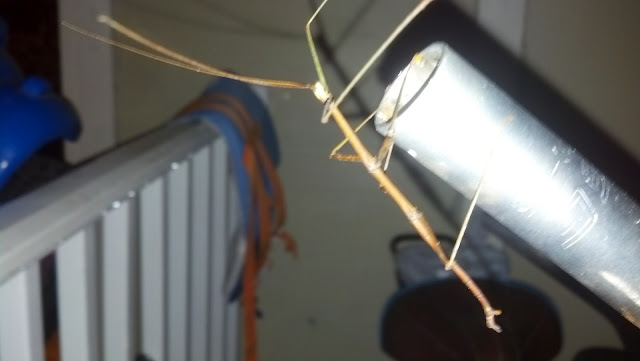 I’ve been fascinated with these things my whole life.  I don’t know why!  Doesn’t matter how old I get, every single time I see one, I am amazed.  Tonight one was hanging on the porch and this fascination overwhelmed me again.
It does look like a stick (with legs and a face and stuff) which is cool all in itself.  But the truly amazing part to me, and always has been, is how does this creature exist?  It must have brain matter, a digestive system, a nervous system, and the like or it couldn’t exist at all.  So how does all of this fit in a stick?
OK, so I probably overthink EVERYTHING…but seriously, this stick functions.  This stick amazes me.  I wish I was smart enough to be a scientist or something because I would love to know how these things work.  If I was a scientist (or Bugologist…or whatever they’re called), the first thing I would study would be the workings of the stick bug (because I’m strange and dorky like that).
Anyone?  Come on…someone else has thought of this, right?  Surely I can’t be the only dork one that’s obsessed with this stick being!  I think if Tom Cruise can have Scientology, surely I can have StickBugOlogy and figure this whole thing out.  Who’s with me?
Stick Bug Lovers UNITE!  (Yes, I know I’m strange…it’s just who I am…sorry if my odd rant leaves you with a head thunk…welcome to my world).